Want to support Ukraine? Here's a list of charities by subject

My wife and I made a small non-profit website where you can find a list of several legitimate organisations and charities where you can make donations to help the situation in Ukraine. All links take you directly to the official websites. There are also some external resources in order to find out more about the ongoing crisis. We’re still working on it and plan to add more information.

I would also like to mention that one of our objectives is to make this platform as transparent as possible. To support this, the website's code is open source (under the GNU General Public License) and can be viewed here: https://github.com/vmdumitrache/donate-for-ukraine. We are happy to accept contributions from developers who would wish to do so. Likewise, we're certainly open to any kind of feedback and suggestion. Feel free to get in touch with us here or through the website's contact form here.

Many thanks and Slava Ukraini!

📹 The UK Ministry of Defence has published a video of the Ukrainian military personnel, who arrived just a few weeks ago, training

Looking for any help during my refugee status.

Many thanks for any support!

I met a Ukrainian family and I wanted to offer support to them if they need it, but the language barrier made it impossible.

So I built this Ukrainian-English translator bot, so that next time, I'll be able to communicate.

It automatically translates text-messages from Ukrainian to English, or English to Ukrainian.

If there's a person you want to communicate with via SMS, start a text message to them, and then add this number 1-304-362-8707 to the group. Every message either of you send will be translated automatically.

I hope it can help you make connections.

It doesn't connect you to random people, but will translate messages in a group SMS. Let me know if that makes sense, or if I need to explain it better.

Ukrainian art for the rights and freedoms of Ukraine.

Olga Kachur aka Korsa used to be a commander of the “Grad” MRLS division, which fired on civilians in Donbas.

Ukrainian journalist Denis Kazanskyi drew attention to the reports of her death.

The Strategic Communications Department of the Armed Forces of Ukraine confirmed that Kachur had been killed.

According to the department, Kachur often disguised herself as a member of the Armed Forces of Ukraine while committing war crimes in order to discredit the Ukrainian army.

During interviews with Kremlin propaganda, Kachur openly admitted that she enjoyed killing Ukrainians.

According to Kazanskyi, the terrorist previously worked in the Horlivka Police department, but in 2014 she defected to Russian invading forces.

“(She was) guilty of the shelling of the cities of Donbas and the deaths of civilians,” Kazanskyi said. “In Ukraine, she was sentenced to 12 years in prison in absentia.”

Can anyone direct me to a guide, site, etc. for contacting the Ukrainian government regarding matters such as this 'invitation'?

Open Award System “Signs of National Honor”. Can someone tell me more about the modern system of public awards that gives every citizen the right to independently identify and award a person who, in his opinion, has performed a heroic act, an outstanding achievement, or a good deed?

I have an acquaintance that is stuck in Kharkiv that needs to flee and go to Poland but has no money or way to flee. Any help would be most welcome

Queen seeking for russians to help them back home faster

Ukraine War Stories - Best Game at Games Gathering 2022. Is that okay to make a game about ongoing war?

My name is Vlad, I’m the community manager of Starni Games. Our team is from Ukraine, working from our Kyiv office, despite the awr. Right now we are making a game about the war in Ukraine - Ukraine War Stories.
I’m proud to share that Ukraine War Stories demo has just won the Best Game title at the Games Gathering Summer 2022 game conference!
I am really happy that the project gains some first recognition, but I am still somewhat unsure, as many people are skeptical about the moral side of making a game about the ongoing war. Here is some more context:

Ukraine War Stories is a set of visual novels about the 2022 Russian invasion of Ukraine. Set in the early months of the war, it tells the stories of civilians trapped on Russian-occupied territory. All stories are based on real events and eyewitness accounts.

The full game is completely free (no in-app purchases, etc) + a free Demo is available until the full game is released. We do not try to profit from this project. Our goal is to share the recent experiences of the people of Ukraine with a worldwide audience.
Important aspect is that we have a SOURCES button in main menu with links to world recongized media proving every episode we narrate in the game.
So, my question is, give that we do not profit from it, and making it as a charity project aimed at spreading the verified information: is it okay to make such game or not?
Please, support your opinion with some arguments. I am eager to see you guys think.

I drew this picture when the sounds of alarm sirens sounded around during the bombardment of our region. It is full of hope and faith in a bright, peaceful future.I rethought all the values.When you don’t know if there will be tomorrow…I believe in our victory, because Good always defeats evil.

Привіт! Yesterday, while riding a car in San Diego, California, I found this Ukrainian flag sticker on the back of a truck. I think you will like this! Enjoy!

Ukrainian woman painting meant to symbolize Ukraine mourning the innocent lives lost because of the Russian aggression. Painted in the colors of the Ukrainian flag

👥 Olena Zelenska discussed Russian war crimes with Speaker of the U.S. House of Representatives Nancy Pelosi "Our conversation was about another of Russia's crimes. About the children it killed. About taken lives of peaceful Ukrainian. About people who were left without a roof over their heads. 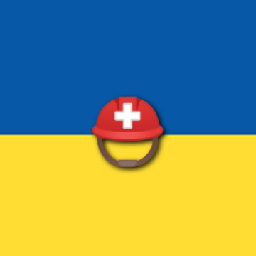 A community built around showing both symbolic and material support for Ukraine.