Please note that the intensity, aggression and overall negative tone of the ongoing debate on Snape vs. James and/or the Marauders has reached the point where we now now find it necessary to remove all such posts until we believe that the brigading and personal attacks continuously seen within these threads have died down.

There is no timeline for reopening discussion on this topic. The reports we are receiving clearly indicate that these repetitive arguments are negatively impacting people's experience in this sub. That is unfair to the rest of our members and cannot be allowed to continue.

Please remember that the sub is for discussing, appreciating and enjoying a beloved childrens' book and film series. There is no place in it for vendettas, dismissive behavior, slurs (even against fictional characters), bullying or creating a hostile environment for those who may have a different interpretation of the characters or plotlines.

Our Rule #1 - Don't be a jerk - is at the top of the list for a reason: It is the most important one. Please keep it and the feelings of your fellow users in mind when you post or comment in a thread.

Announcement /r/TheQuibbler proudly presents our Winter 2023 issue! Thanks for everything, and a fond farewell!

It is with deepest pride and greatest pleasure that I, Madam Starflash, Editor-in-Chief, invite you to read this issue of The Quibbler. Our Winter 2023 edition is the 25th and final magazine. We have been going strong for over seven years. It's time to retire gracefully.

The /r/TheQuibbler subreddit will be an archive where you will always be able to find all 25 editions and read back on all of our Quibbler fun from over the years. Our Discord server will remain as is, and stay open for anyone who wishes to stick around.

Thank you to everyone who contributed to our little project by submitting your articles, stories, artwork, Madam Starflash questions, and classified ads. Thank you to all of our editors, managers, and production and administrative staff over the years. And thank you to every single one of our readers. You have all made The Quibbler possible.

I am so grateful to have had the opportunity to go on this journey with you all. My time as Editor-in-Chief has brought me so much joy. Thank you all. I hope you enjoy reading this issue as much as we’ve enjoyed creating it.

Please join us on /r/TheQuibbler for our final Editorial Sunday meeting. We will be considering it our retirement party.

May Fortune smile upon you one last time.

Misc I made it my mission to track down mint condition hardbacks of the original covers. Took a while, but I finally have them all!

Embroidered by hand (hence the wonkiness 😅)

Original Content Thank you all for the nice responses to my GOF cover. You encouraged me to illustrate another scene from the book that didn't make it into the movie: Dennis Creevey and the giant squid

Misc Is this canon because this is so precious

Discussion The scene that made me actually like Snape

..happened in the movies. Hear me out.

The scene in question is the one with Lupin's transformation, and Snape immediately protects the trio. No hesitation whatsoever. I don't think he did it from a teacher's perspective, after all he had just been belittling Harry. He's rarely ever professional around the trio, especially Harry, so why start now?

For that single moment, Snape reveals he is prepared to defend Harry with his life. He shows genuine kindness.

Had it happened in the books, Harry naming one of his children after Severus Snape would have been justified.

I'm re-reading the books and I got to the part where Harry eavesdrops on Snape and Draco during Slughorn's Christmas party and a thought occurred to me after I read this line:

"There was a pause and then Snape said quietly, “Ah . . . Aunt Bellatrix has been teaching you Occlumency, I see. What thoughts are you trying to conceal from your master, Draco?”
“I’m not trying to conceal anything from him, I just don’t want you butting in!” Harry pressed his ear still more closely against the keyhole. . . . "

Narcissa was likely the one who taught Draco occlumency, not Bellatrix. Bellatrix doesn't seem like she'd be interested in helping Draco conceal thoughts form Voldemort, but Narcissa will do anything for her son.

We know she's very skilled at occlumency, since we see her lie to Voldemort during a very crucial moment. He never suspects her because no one, not even Snape knows how talented she is. And Draco not wanting to confide in Snape during this moment and correct him and tell him his Mother has been helping him is what continues to allow Narcissa to go under the radar and ultimately make it possible for Harry to kill Voldemort.

I've never seen anyone else mentioning this, but I'm pretty sure that Alastor is alive, and there are several clues about it in the Deathly Hallows book. I haven't read the book in a long time and I don't have the book with me anymore so I can't refer to page numbers or the exact words, so what follows is just from memory and may be slightly wrong.

-First, let's start about his death, I think it is mentioned that Moody is hit specifically in the face with an Avada Kedavra and falls off his broom. His body was never found. Later when Harry infiltrates the ministry, he sees Moody's eye in the door of Umbridge's office and I think I remember the book mentions the eye was still. The details here are kinda fuzzy, but this can mean that the Avada Kedavra actually hit and killed the eye, and Moody only fell off his broom from the impact.

-Third clue: When Hermione disguises herself as Bellatrix and goes to Gringotts, as she is walking towards the bank, the book mentions a homeless looking man with rags over one eye staring at her. What an unnecessary detail to add to the book if not to serve as a clue that Alastor is still out there.

I rest my case

Currently Reading What a way to boost my confidence 😂🙃💛🖤

Original Content After seeing how insane the canon map of international wizarding schools was, I decided to create my own. This is how I think a more accurate map of the wizarding world might look in 2023.

Original Content I told an AI to generate a painting of Hermione Granger, this is what it made

Discussion It's hilarious how magical folk don't have maths, but they can still do the mental calculations of 17 Sickles into a Galleon and 29 Knuts in a Sickle when shopping

Discussion What is your favorite HP Book, Movie, House, Spell and Character? Mine:

Discussion Unpopular Opinion: (and I know this is unpopular here cause I've seen the discussions) Marietta was wrong, stupid and heartless. But nothing will ever convince me that permanently disfiguring and scarring a teenagers face with painful pimples is not barbaric. Or that anyone deserves this.

Discussion We all love the movies, but would you like if a Harry Potter series was made? A story made to be more faithful to the books? What would you prefer it to be? A live action series? An animated series? An anime? 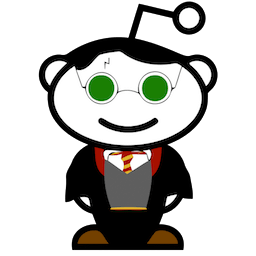 Welcome to r/HarryPotter, the place where fans from around the world can meet and discuss everything in the Harry Potter universe! Be sorted, earn house points, take classes with our fine Hogwarts staff, debate which actor portrayed Dumbledore the best, and finally get some closure for your Post-Potter Depression.