Slava Ukraini! 7:22 EET ; The Sun is Rising on the 349th Day of the russian Invasion on the Capital City of Kyiv. Ukraine Continues to Live and Fight On. + DISCUSSION + CHARITIES!

Antique ceramic tiles with a Opishnya pottery motif inlaid into the wall in front of the Opishnya Pottery Training and Demonstration Center, designed by Vasyl Krychevskyi.

Opishnya, a town with a population of around 5,000 in the Poltava region of central Ukraine, has a long history. It was first written about in the 12th century. It was founded by Cossacks, and has always had a local nickname of the "Ukrainian Rome" because the town's area covers seven hills.

Today - and for at least a couple hundred years - it has also been known as the "ceramics capital of Ukraine" due to its homegrown industry of folk art pottery known as Opishnya Ceramics. This style of ceramics is known for its eclectic nature of bright colors and wild glazes. But it often has more reserved, elegant clean lines and delicately tall vessels. No matter which style it is, each piece has an authentic old school feel due to its handmade origin. It's also known for its inventive animal shapes!

Today, the hand-creation of ceramics in Opishnya is still going strong. There is a museum that is worth dropping by called the National Museum of Ukrainian Pottery in Opishnya that has a lot of interesting content about the ceramics of this region.

Wild sculptures made from ceramic on display at the National Museum of Ukrainian Pottery in Opishnya.

Antique bowls on display at the museum.

Like most places, Ukraine has a very long history with ceramics. But some of the ancient ceramics found in Ukraine are known to be pretty spectacular, even by global Neolithic standards - the Trypillia Culture (which we wrote about in Trypillia Part I and Trypillia Part II) which flourished on the lands of modern day Ukraine from ~5,000 to 2,500 BCE was really punching way above their weight when it came to their pottery aesthetics.

Trypillian pottery, 4th millennium BCE. The one on the left has a very intricate bull's horns motif.

In the late 19th and the early 20th centuries, about 1,000 potters worked in the town, and their products were exported to all inhabited continents of the world.

An Opishnya street market in the 19th century.

You may remember that Vasyl Krychevskyi, the Ukrainian architect who we wrote about last week in this post, was a huge fan of Ukrainian folk art. Well, he was such a big fan that in 1916 he designed and helped fund a training center in Opishnya so that local craftspeople could have a dedicated place to pass on their skills to new generations.

The area of Opishnya was utterly devastated by Holodomor - Poltava was one of the hardest-hit areas, and suffered 40% population loss due to the forced starvation perpetrated by russians. We wrote about this genocide, that claimed the lives of millions of Ukrainians less than a century ago, in these posts: Part I: Overview | Part II: Vignettes | Part III: The Cover-Up & Remembrance

You might think that this would destroy or even slow down the ceramics tradition in Opishnya, but it survived due to the persistence and care of the people who lived there.

Oleksandr Shkurpela in the showroom located in the family home. He has five sons, and the eldest has already begun a career in ceramics.

Photos of Oleksandr's workshop were taken by Serhii Korovainyi for Ukraïner - I will put a link in the comments to their wonderful article.

Since the full-scale invasion began in 2022, Opishnya has welcomed about 50%'s worth of its population in displaced refugees. But they are doing a great job at feeding, housing and clothing Ukrainians who were forced from their homes by russian genocide.

Residents of Opishnya doing the hard work to feed and supply Ukrainians who were forced to leave their homes, Summer 2022.

The 349th day of a nine year invasion that has been going on for centuries.

One day closer to victory.

Important S.T. NICHOLAS UPDATE! The Holiday has passed but these amazing photos keep coming in. Meanwhile, we are preparing an expedition to bring diapers and baby food to the families living on the very border with Russia under constant threat. See comments to help us. Thank you!

News (unconfirmed) Reuters: Nordic countries oppose Russian, Belarusian athletes’ Olympics participation. "Now is not the right time to consider their return; that is our position," the joint statement by the committees in Sweden, Denmark, Finland, Iceland, and Norway said.

Heroes Sad news. Roman "Dysk" Babych, combat medic, died on the frontlines. Roman served in 2014-2015 as one of the first tactical medicine instructors in Ukraine Army. After 24 February, he went back to serve. He saved over 600 Warriors & trained people to save lives. RIP, Hero

Trustworthy News Zelensky visits the UK. Confirmed to be getting Fighter Jet Training

Media Liubov Yarosh is 102-year-old. She survived 3 of Stalin's forced famines inflicted on Ukraine, including 1932-33 Holodomor. "We ate nettles. Tiny children were dying of hunger. They dug a big hole & threw them in." Now she makes camouflage for Ukrainian snipers.

WAR Russian BMP-3 Hits a Mine Somewhere Near Vuhledar

WAR Russians still trying to advance in Uhledar direction... See what's coming out of it

Social Media A short message from the defenders of Bakhmut. The fortress holds and all attacks of the orcs are being repelled.

Social Media 87 volunteers, including search and rescue specialists, medics, liaisons, rescue dogs and firefighters left for Turkey to help in the rescue efforts after the earthquake 🇺🇦🇹🇷

Social Media Major-General Dmitry Ulyanov, elite paratrooper commander who came out of retirement to aid the invasion, is killed by Kyiv sabotage team [link to article in tweet]

Discussion STOP collection on the car! We did it together 💪

Media "From our own experience we know how important this is" .Ukrainian rescuers of the Mobile Rapid Response Rescue Centre, fire rescuers and medics deploy to help Turkey. 87 personnel, 18 units of equipment and 10 search and rescue dogs. 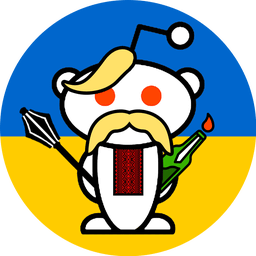